The Australian Football League ( Aussie Rules Football or Footy ) has some of the most complete athletes on the planet. The game is filled with constant sprinting, jumping, kicking and tackling for upwards of  two hours. I wanted to take a look at this sport's training regimen and see what is done to get and keep these athletes so fit.

I wasn't all that surprised to find that all the athletes/positions workout about the same way. Lots of running drills (jogging and sprinting pyramid style). The weight lifting was not much different than what you find in most High School Football training. A steady diet of squats, bench press, shoulder press and ab work is standard. Maybe the Aussies hold out on what hits the web or, I just didn't find the right articles. I noted the only real difference between American Football programs and AFL programs was the volume of sprinting they do throughout one week of training. 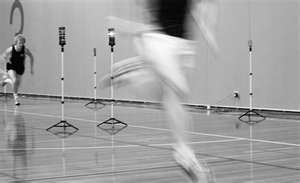 On average any given player in an
AFL game runs 7 miles of mostly sprints while being hit, run into, tackled and battered from every angle. It is not uncommon to see most players with wrapped shoulders and knees. It's by far one of the toughest sports on the planet. And as a new fan I hope to see more games on TV in the States.  As far as I'm concerned Footy beats Baseball hands down on pure entertainment factor.

Interested in watching an AFL game now?
This Friday first-place team Collingwood Magpies take on the Hawthorn Hawks. Saturday, second-place Geelong Cats play the West Coast Eagles. The winners of these games face off in the AFL finals (Aussie Super Bowl).
I could give a quick run down of the rules and what not but wiki does it better. http://en.wikipedia.org/wiki/Laws_of_Australian_football